April 10, 2017
Milestones. Something that used to pertain primarily to project plans. Now, something that pertains to the development of my children. Some are physical, some are behavioral, and all of them serve to set expectations for something that is never the same for any child.

I haven't forced my children into any of their milestones. Despite being (unnecessarily) worried at times, I've let it all occur naturally - sometimes with encouragement, other times not at all. Except with bottles, because I had to wash them. We were done with that shit at 24 months and 1 day.

So it shouldn't come as a surprise that my 4-year-old still has a pacifier. My pediatrician who I adore (I might wear lipstick to doctor's appointments) told me "no kid goes to Kindergarten with a pacifier in their mouth".  He said the same about potty training, so I let it go and low and behold the kid did it on his own at 3 1/2 and we never looked back. This guy might know what he's talking about, right?

Then there's the fact that I had a pacifier until I was almost 3. I also had a gap in my teeth you could fly a plane through and the overbite to match. Followed by a long and expensive stint with braces. This caused me pause with the old paci for my own kids. Until my daughter was born and I realized my mouth problems had nothing to do with a pacifier. Poor girl. I've already started saving.

I haven't pushed it, but did share a few months ago that at some point he'll have to let the "Paci Fairy" take his paci for the new babies who need it more, and he'll get a new lovey in return. He wasn't hearing it. And I could see the anxiety rise in his body every time I brought it up, so I dropped it.

Last night at bedtime, somewhat unexpectedly, we talked about my pacifier and my lovey and blankie, both of which I still have so I showed him. Granted, my lovey and blankie had nothing to do with the disappearance of my pacifier (that would be my Aunt's purse, dropped by accident) but sometimes you lie to your kids. For their own good, of course.

Tonight, getting ready for bed he tells me he is "so ready" for the Paci Fairy to come and take it away and get his new lovey. That was it. He was ready to be a big boy.

Seems I, however, am not. 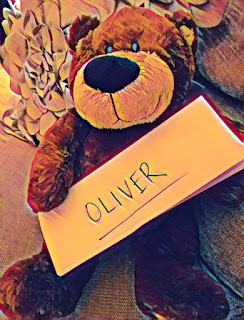 I might have asked him 900 times "Are you sure? You know it's gone once she takes it?". I might have cried as I left his room. Because this is it, I realized. It's the last remaining baby milestone. That, my friends is a wake-up call. And I'm left wondering how life can pass that quickly despite knowing full-well the cliche is entirely true and my reality. It goes so fast. You're damn right it does.

As he sleeps upstairs with his paci tucked under his pillow, I sit here thinking I might tell him the Paci Fairy was busy and couldn't make it. Or that Delta was delayed (some truth to that). It's what I WANT to do. But instead, I've written a note, tucked it into a snuggly, soft teddy bear I bought several months ago in anticipation of this moment, and will leave it by his bedside in exchange for his paci.

A paci I will keep in a box forever. And ever.

Popular posts from this blog

April 07, 2017
I've spent a week practicing work-life. That is, work and life intertwined with no clear lines of delineation. It all just runs, and if you're lucky, works together.

I spent Tuesday morning at the park with my kids, and the afternoon on conference calls. Yesterday I did (much needed) lady maintenance in the afternoon and spent the evening writing a proposal and devising staffing plans. And today, I worked first thing, took a trip to the grocery store, worked some more, and now I'm going to take a nap. As soon as I stop writing.

And, surprise, it's been an awesome week. I gave myself the ok to decline meetings to which I wasn't essential, and I felt no guilt about taking some time for me when I could have been spending it with my kids. I was super productive at work AND home, and I'm a much happier non-conflicted human being for it. Dare I say I felt...balanced?

I know not every week can be like this - I only worked from home, I had no travel, and the kids were…
Read more

April 04, 2018
Do you remember when I said parenting with a full time job was like walking up Everest with one leg, in a bikini, while stopping to smoke a pack of Marlboro's every 10ft? What I didn't tell you is that it actually feels like that. Because my name is Courtney Saunders and I'm a walking heart attack.

Hypertrophic Cardiomyopathy to be specific.

Let's back up.I was born with a congenital heart defect and then found to have an aortic bicuspid valve during my first pregnancy. Lately, and by lately I mean it started 9 months ago (because I am really good at taking care of myself) I've been having chest pain and difficulty walking up steps or to my car from airplanes.

It's stress. It's the alcohol. I'm exhausted. That's what we tell ourselves.

Because of these symptoms, a few weeks ago I finally went to the doctor and had a stress test and echo of my heart and I failed both with flying colors. Ok, no biggie. Logic says stenosis (narrowing of my a…
Read more

This year. This god-damned year. By far the toughest personally, professionally all the mother-fucking way around. I'd say emotionally, but I am numb. Legit. I feel nothing.

Case in point, my dog died. My first baby. I was sad. But not as sad as I should have been. Pretty sure I'm going to have a nervous break down come April when I somehow find my way out of this dark hole and realize he's gone. That is if I'm not having open heart surgery and recovering, blissfully unaware on a 30-day supply of Vicodin. Almost makes that possibility appealing.

And yet I still give fucks. WHY, WHY OH WHY (insert illustration a la Mo Willems and the Pigeon series...parents, you feel me)?

I want to kill everyone. Except the people I like. And that list has grown significantly shorter in 2018. Maybe it's me. The older I get, the less and less I like people. Clarification - ignorant, soul-sucking unwoke, …
Read more

31
My journey through 31, clueless.
All These Little Things
The joy of my first pregnancy
Fantabulous Mommy
A failed attempt at Mommy-blogging